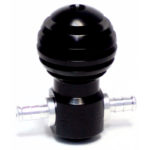 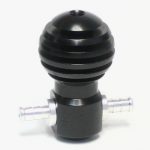 The Atomic has earned a reputation as being one of the most reliable and effective manual boost controllers on the market, boasting a repeatable and steady boost curve, quick rise rate, and great bang-for-buck!

The Atomic Boost Controller was tested on an MY02 Subaru WRX (whose only mods were a turbo-back exhaust) back-to-back with the factory controller. A base-line power run was performed with the factory boost control, and the boost level was measured at the same time. The Atomic was then installed and set to the same peak boost level of 0.9bar (13.2 psi) so that the spool-up time could be accurately compared before and after the installation.

The dyno graph shows the Atomic boost curve in green, and the factory curve in blue. 4th gear is used for both tests, and proof that the Atomic was set to the same peak level is seen towards the end of the chart as the two curves meet. However, notice the massive gains down low in the rev range, as much as 18kW (23.4hp) AT THE WHEELS!

This increase in power shows that the Atomic allows the boost to rise significantly earlier than the factory controller, which on the road represents much better acceleration from a whopping 1700RPM earlier in the rev range. All this WITHOUT exceeding the factory peak boost level, and for a pocket-money price! 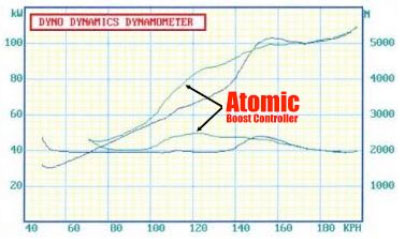 It is important to note that the MY01-02 (MY02-03 in the US, GDA chassis) model responds very well to this modification, because the factory boost mapping is very conservative in an attempt to keep the torque curve flat and the power delivery linear (which totally kills the feeling that you are driving a turbo!). Note of course that boost can be increased above the factory level for more power gains, but the purpose of this experiment was only to show the improved spool-up potential on this particular model WRX.

So, if you want your GDA WRX to REALLY feel lively, fit an Atomic or Reactor boost controller for the best “bang-for-your-buck” modification you can make!

When you need simple, reliable, set-and-forget boost control, a Manual Boost Controller is hard to beat. Installation is as simple as connecting a couple of hoses, and setup is as easy as turning the adjustment until you hit your target. Once that’s done, you can forget about it and drive your car. Being a rugged, mechanical device, it will never vary or fail, no matter how much abuse you can throw at it.

Our Manual Boost Controllers are available in two types, one is suited for conventional pneumatic wastegates, and the other is for use with vacuum-actuated VNT (Variable Nozzle Turbine)/VGT (Variable Geometry Turbine) turbos that are commonly used on diesel engines.