The Truth About Compressor Surge

What’s in a name?

First of all, let’s get the terminology straight. Compressor surge often goes by many other names (usually in reference to the distinct sound made when surge occurs) such as turkey, pigeon, dove, dose, wastegate chatter, sequential BOV and undoubtedly many others I am not aware of or have yet to be invented!

Whilst I can’t argue that compressor surge noise does share a similarity to the noise made by certain avian species, the remainder of these names are either misleading or flat out incorrect. For example:

I have no idea how this name was derived, but it is most commonly associated with the Holden VL Turbo, since no factory diverter valve is fitted and it compressor surges readily. Going further, a “Dose Pipe” typically refers to any type of pod filter arrangement that makes the fluttering sound louder than with a factory airbox, therefore a “Dose Pipe” is not a device that creates the fluttering sound, but rather a means of making it louder.

This is a term that has found its way into common turbo vocabulary, and is often incorrectly used to describe compressor surge. Whilst it is possible for a wastegate to make a small clattering or rattling noise if it is just at the point of opening (exhaust pulses can make it vibrate on its seat before it lifts clear), it has nothing to do with compressor surge.

What is compressor surge?

To the driver, compressor surge is apparent as a fluttering or repeated “choofing” sound, typically when closing the throttle.

Here’s a good YouTube link showing classic compressor surge caused by the absence of a BOV.

To the turbo, compressor surge is a condition that occurs whenever turbo boost pressure is high and airflow is low. GFB Discussion Paper The Truth About Compressor Surge

Figure 1 is a typical turbo compressor map. The vertical axis is labelled “pressure ratio”, but for this explanation it may be more convenient to think of it as boost pressure. The horizontal axis is the turbo’s airflow.

Put simply, any time the boost pressure (more correctly, pressure ratio) and airflow meet to the left of the surge line, the turbo is said to be operating in surge. In the diagram, two pairs of lines are shown. The pair intersecting on the right is when the throttle is open, the engine is “on boost”, and the turbo is operating comfortably within the normal region.

The second pair of lines show how when the throttle closes and no diverter valve is fitted, the pressure increases, and the airflow drops, pushing the turbo into surge. The mechanics of surge Ok, so what is actually going on in the turbo when surge occurs? When conditions are right to cause surge, a combination of the lack of airflow, consequent rise in pressure, and the high speed of the compressor all cause the compressor blades to effectively lose their “grip” on the air. Aerodynamically speaking, the air separates from the back of the compressor blades, allowing some air to escape back out through the compressor. The resulting pressure drop in the intercooler piping allows the blades to “grip” again which, under the residual momentum of the turbo, will increase the pressure and the cycle repeats. This causes the characteristic fluttering sound of compressor surge (kind of like blowing through a fan), and also results in pressure pulses in the intercooler piping. Figure 2 shows a typical measurement of the pressure fluctuations seen in the intercooler piping when compressor surge occurs when the throttle is closed and no diverter valve is fitted.

There is a common belief that compressor surge can cause the turbo to “stall” (i.e. stop spinning), or even spin backwards. It’s worth clearing the air and saying that this is incorrect – the turbo will never stop dead or reverse direction because of compressor surge. The sound of surge itself (and the description above of how it occurs) is a clear indication of this – if the turbo stopped or reversed direction it would not make a repeated “choofing” sound, nor would the intercooler pressure behave the way it does in figure 2.

The term “stall” generally has two meanings, which is where the confusion comes from. Stalling an engine or rotating device usually means it stops rotating, hence its (incorrect) application to turbos.

The other meaning is used in the aerodynamic sense which is more correct for turbos. When the air separates from the back of the turbo compressor blades, this is in effect similar to the way in which an aircraft wing “stalls”, where airflow separates from the top of the wing’s surface and lift is drastically reduced.

So that’s the technical background behind compressor surge. In part 2 we look at how it applies in the real world, and what the effects are. 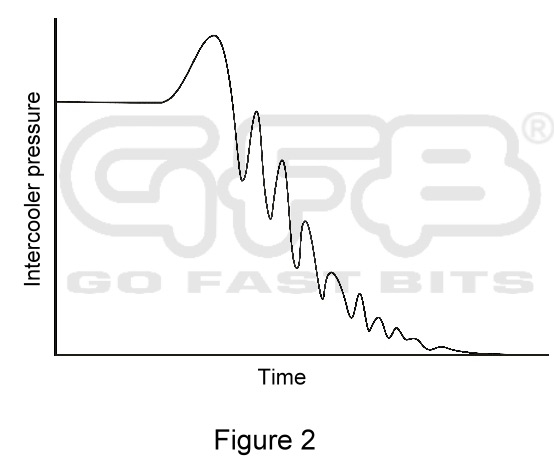 So we know low airflow and high pressure are the conditions that cause compressor surge, but what causes those conditions and when are they likely to occur?

compressor-surge-3By far the most common situation is when there is some boost pressure in the intercooler pipes, and the throttle is closing (lifting off for a gearshift, or slowing down).

A typical turbo compressor map was introduced in Part 1, showing the effects of closing the throttle with no diverter valve fitted.

However, with a GFB diverter fitted, the conditions in which surge is likely to occur cause the valve will open in order to provide a relief path for the air. So as the throttle closes, the GFB valve will open to reduce pressure in the intercooler pipes and also provide a relief path to allow some airflow, both of which should prevent surge. This is represented in figure 1.

If surge occurs even with a diverter valve fitted, either the valve is adjusted incorrectly (most common), or the valve is too small for the task (which can occur with factory valves when boost pressure and power are increased).

There is also another set of less common conditions that can lead to compressor surge. If a turbo is incorrectly matched to an engine, it is possible for the engine to spool the turbo before the airflow through the compressor and into the engine is high enough to avoid surge. As such, the turbo will operate in the surge region even with the throttle open.

This can occur when mating a large compressor to a small turbine to enhance low RPM response. When surge occurs in these conditions, it can be particularly severe and care should be taken when selecting a turbo that it will not operate in the surge region at full throttle at any RPM. This is where a good understanding of the compressor map comes in handy.

In these conditions, ideally, a different turbo should be used, but it is possible to eliminate the surge with a variety of methods which are more related to engine tuning and are beyond the scope of this article.

So really, how bad is surge?

There is generally concern over the effects compressor surge has on the turbo, ranging from:

So what’s the reality? First of all, engine damage is highly unlikely, unless the turbo fails catastrophically and sends bits of compressor through the engine, but even then it would have to make it through the intercooler first.

The severest form of surge occurs during wide-open throttle (WOT) rather than when closing the throttle – the turbo is surging because it’s cramming air in faster than the engine can take it. In these conditions, the diverter valve has no role to play as it should be shut under WOT conditions. Since the turbo is actually making significant boost, is at high RPM, and the pressure is fluctuating wildly because of the surge, these conditions do have the potential to cause greatly accelerated turbo bearing wear and/or damage to the compressor wheel.

The next level down in severity is having no diverter valve of any type. In this case, the turbo will surge every time the throttle is closed if there is boost pressure in the intercooler. These conditions can cause accelerated turbo bearing wear, however in lightly boosted systems this is unlikely to shorten the turbo’s life a great deal – note that diverter valves were not commonly factory-fitted to turbo cars prior to the early ‘90s, and turbos were still considered to have an acceptable life expectancy. Such turbo systems however were generally running relatively low boost pressures, and it would be fair to say that wear would be greater on a more heavily boosted turbo. The lowest level of severity would be cars fitted with a diverter valve that sometimes encounters surge at lower RPM, before the turbo has fully spooled up. In these cases, wear associated with the surge could be considered negligible – other factors such as increased boost or even differences in driving style are more likely to have a greater impact of the overall life-span of such a turbo than low RPM surge.

(Whilst this rocket attachment did create some mild compressor surge, the entertainment value was deemed to be worth it…)

Ok, so if the turbo isn’t going to explode from not having a valve fitted, what’s the point of fitting one then? A correctly set up GFB diverter valve is like having your cake and eating it, too. You prevent compressor surge, removing it as a factor in the turbo’s life expectancy, but you also get the best possible throttle response by setting the valve up correctly.

Turbo Management System, or TMS for short, is a name applied by GFB to valves with design features that help ensure the best throttle response, and more information on this can be found at www.gfb.com.au/tms-respons. The principles behind TMS are discussed in technical detail here:

Another very important reason for having a diverter valve is for the benefit of the engine management system. Compressor surge in modern cars can have the potential to cause drivability issues such as jerking or “bucking” during a partial throttle lift, most commonly affected cars are late-model Mitsubishi EVOs. Whilst the factory valve is designed to eliminate this issue, it also prevents higher boost pressures being used and doesn’t offer the maximum possible throttle response, opening the door for a well designed aftermarket diverter valve. 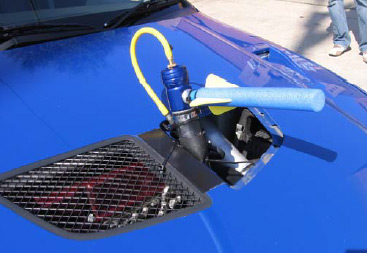 With an understanding of the mechanics of compressor surge and the conditions that cause it, it can be seen that in the majority of cases it will not cause significant turbo wear or damage, however there is the potential if it is severe enough. There is however good reason for preventing compressor surge, and the fitment of a diverter valve that addresses the issues discussed is the best way to do so.