When chasing boost leaks, the humble and effective intake pressure test or smoke test is often used. Pressuring the intake, then spraying soapy water to look for bubbles, or using a workshop smoke tester will give a visual indication of boost leaks.

Unfortunately, the results may not always be what they seem. If you have a GFB valve, or ANY dual-port BOV fitted to your car, a smoke test will very likely return a “false positive” for a boost leak. There are a few things about the common smoke test that make it difficult to determine if a detected leak is really there.

To begin with, let’s look at a typical turbo system.

When you are driving, you floor the throttle and reach peak boost. In this situation, the intake manifold and intercooler (and associated piping), are effectively at the same pressure, (give or take a small amount for losses through the intercooler or throttle).

Therefore, in the diagram above you’ll see that the BOV is subjected to the same pressure top and bottom. This is essential for a GFB valve, as is the case for most valve types, because the pressure from the manifold at wide open throttle (WOT) counter balances the boost trying to push the piston open. 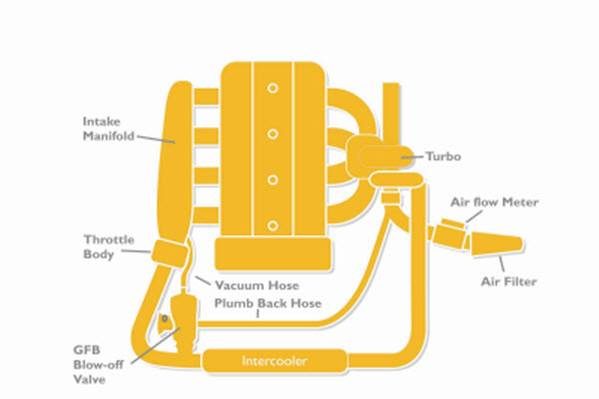 Here’s the first problem: A smoke/intake pressure test does not typically pressurise the intake manifold (because the throttle is closed and likely an engine valve is open), therefore the top of the BOV is left un-pressurised. This means the BOV will begin to blow open with as little as 5psi of pressure – this is the first case where a false positive can result.

Third problem: The factory bypass valve might pass a smoke/pressure test with flying colours, but in actual fact the way the test is conducted means it could be wide open and you won’t see it in the test. This is because the factory valve is receiving equal pressure on the inlet and outlet within a closed system, so even if the valve were jammed wide open there’s nowhere for the air to go and you won’t see it as a leak. Rest assured, factory valves DO blow open under boost, and the only way a pressure test will show that is if you disconnect the recirc hose during such a test.

As a separate issue, it should be noted that although a smoke test can point to a leak, it doesn’t actually give any kind of indication of the size of the leak. Sure, a leak is a leak, right? By definition, yes. But even leaks that are detectable by smoke test shouldn’t necessarily be assumed to be the cause of boost loss without further investigation.

If you are smoke testing because your car is down on boost by more than a few psi, keep in mind the size of the leak you are looking for. To lose a measurable amount of boost pressure when driving, you’re not looking for a tiny hole that lets out wisps of smoke or blows a few bubbles, you’re looking for a leak that is equivalent to a 6mm or larger hole.

Note that a smoke tester pumps a miniscule amount of air in comparison to a turbo, so therefore if it is able to build pressure in the system any existing leak is highly unlikely to be larger enough to be the cause of boost loss.

If on the other hand the smoke tester is simply unable to build pressure in the system at all, then that would indicate a reasonably large leak that could well be the cause of boost loss.

So, what can you do to eliminate the “false positives” during a smoke test? First thing to do is ensure the top of the valve gets the same pressure as the bottom – this will ensure the valve stays closed as it would when driving at WOT. The second thing to do is remove the recirc hose from the valve and plug it – this will prevent pressure leaking out through a path that is never pressurised in real life.

Finally, if you’re chasing a boost drop and the smoke test keeps nagging that the blow-off valve is the problem, there’s one sure-fire way to prove it either way – it’s very simple, requires no tools and you’ve probably already performed it without even knowing! This test is relevant to any GFB valve that you can hear when it vents (through the filter if it’s fully recirculated, or to atmosphere).

Here’s the test. If a GFB valve goes “whoosh” when you shift gears, it’s about 99.9% certain that it’s not the cause of a boost pressure drop.

Bold statement, we know – here’s the reasoning behind it. If the valve vents normally with a “whoosh”, it means the piston is not physically jammed, and the vacuum hose is connected properly, since without the vacuum hose the valve would not stay shut under boost, nor would it vent when the throttle is closed.

Since the piston is not jammed and the vacuum hose is connected, this also means that the piston cannot possibly open under WOT conditions, because the pressure on both sides of the piston is equal, which therefore cancels itself out (no matter how high the boost is) – in fact, a GFB valve is capable of staying shut under WOT conditions even if the spring were removed entirely! If the valve is not opening under boost, then any leak the smoke or pressure test shows is likely to be a false leak.

Put simply, if a GFB valve vents normally when you shift gears, it is not physically possible for it to leak enough air to cause a measurable boost pressure drop. It’s either working or it’s not.

So the smoke tester is a very useful tool, however the results of such testing should simply be regarded as highlighting areas of interest for further investigation, rather than the definitive answer to a problem.