Electric Turbos – GFB Talks About The Facts And Fiction?

Take a look at any forum discussion about an “electric turbo” and you’re sure to open a pandora’s box. Popular opinion is that the idea of making boost with an electric motor is laughable. Most of this scepticism has (understandably) been fuelled by cheap products that are little more than computer fans, and videos of leaf blowers attached to car intakes.

So yes, much of the negativity around electric turbos is justified, but the good news is they do work, they can make “real” boost, and we may be about to enter an era where electric turbos find their way into the aftermarket as a legitimate power maker.

Let’s get one argument out of the way – the term “electric turbo”. It is more accurately an “electric supercharger”, since it doesn’t use exhaust gas to spin the compressor. However, that’s hardly worth debating, so call it what you will and let’s move on!

Next, let’s deal with the straight-up disbelief that it’s even possible. Three words should do it – F1, Audi, and Tesla. F1 and Audi are already using electrically assisted turbos and have been for a few years. If a Tesla’s 0-100km/h time can easily match that of a supercar, how is it so difficult to imagine an electric motor spinning a compressor to make boost? Again, this is another argument not worth having. 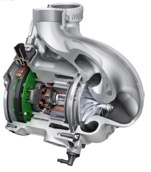 Now we get to the nitty-gritty. Even once it’s proven to be possible, the argument shifts to feasibility or cost effectiveness. At this point where we probably need to define the parameters of the argument to go any further. How much boost does an electric turbo need to produce on what size engine for it to be taken seriously? How long should it be able to produce that boost, assuming it’s powered by batteries? How much would you pay for it?

Granted, existing technology does have some limitations and just can’t match a “real” turbo for outright power. Currently, electric turbos are mostly being used to supplement traditional turbos, effectively reducing or eliminating turbo lag, rather than being the primary source of boost pressure. Used as a “fill-in”, the electric turbo is only operational during transient conditions, meaning a small and cost-effective battery can be used and recharged fast enough to keep up with demand.

Despite these limitations, there are two very useful and exciting applications for an electric turbo in the aftermarket. One is to use it exactly as the OEMs do – supplement a turbo to reduce lag. The only difference being the size of the turbo you’re supplementing! Imagine being able to fit a much larger turbo and still have it spool up like factory!

The second opportunity is to supplement a naturally aspirated car without having to do a full turbo system. It is entirely possible (especially with the new system by Torqamp) to bolt an electric turbo on and make more power and torque per dollar than traditional NA mods. Ok, it may not give you as much as a “real” turbo, but let’s face it – if you expect to make big boost on an NA engine you’d better be prepared to upgrade the internals, the fuel system, and the ECU.

Whilst the technology is still in its infancy and is currently targeting economy and drivability, it won’t be long before electric turbos find their way into aftermarket performance applications, especially with players like Garrett and Borg Warner showcasing their involvement in this sector. Stay tuned!