Compressor surge was explored in depth in our discussion paper “The Truth About Compressor Surge”, and it is worth taking the time to read this article as background. However, in that article the phenomenon of compressor surge occurring during acceleration with an open throttle was only briefly mentioned as at the time it was not particularly common. With modern engines and turbos now capable of making high boost at low RPM, open throttle compressor surge is becoming more common and is worthy of its own article.

What is open throttle compressor surge?

Compressor surge is a condition where the airflow through the turbo’s compressor becomes “unstable” and is usually evident as oscillating boost and a “fluttering” or “chopping” sound. This occurs when the car’s ECU has been tuned to generate high boost pressure at low RPM, and the driver will generally notice the surge happening in higher gears when accelerating at part or full throttle on a highway. Minor surge is usually just a soft fluttering sound, but more severe surge can cause the car to physically jerk, and the boost gauge will oscillate rapidly. Typically, the surge abates as RPM increases.

Often, open-throttle compressor surge is incorrectly diagnosed as the diverter or blow-off valve rapidly opening and closing, which is simply not true.

As discussed in “The Truth About Compressor Surge”, the environment in which the turbo is said to be operating in surge involves a high pressure ratio and a low flow rate. These conditions can be met by rapidly closing the throttle for gearshift (as the flow rate suddenly drops and the pressure ratio increases), but in this paper we’re interested in the case where the throttle remains open (or partially open) and the boost pressure is high, but the RPM and therefore the airflow is low enough to cause the turbo to operate in the surge region (the yellow area on the compressor map below)

Look at the K03 compressor map shown opposite. For the purposes of this topic all you need to know is the horizontal axis represents airflow through the turbo, and the vertical axis can be thought of as boost pressure (it’s actually pressure ratio, but let’s not complicate things).

This map clearly illustrates that if airflow is low and boost is high, you’re on the left-hand side of the surge line, which means the turbo is surging.

In real world terms, these conditions are easily met by a modern turbocharged engine when tuned for higher-than-factory boost. This is because modern engines and turbos, using technology like direct injection, high compression ratios, integrated exhaust manifolds, and variable cam lift/timing, have the potential (when tuned) to generate enough exhaust flow at low RPM to spool the turbo to high boost and into the surge region.

The two plots on the compressor map illustrate an example of a stock vs tuned boost curve. The green plot is representative of a stock boost curve, which stays entirely to the right of the surge line. The blue plot shows what happens when the tuned boost curve is too aggressive and will result in compressor surge, typically in a higher gear just as the engine hits peak torque. As RPM increases, the surge ceases when the airflow is high enough to cross back over to the right of the surge line. 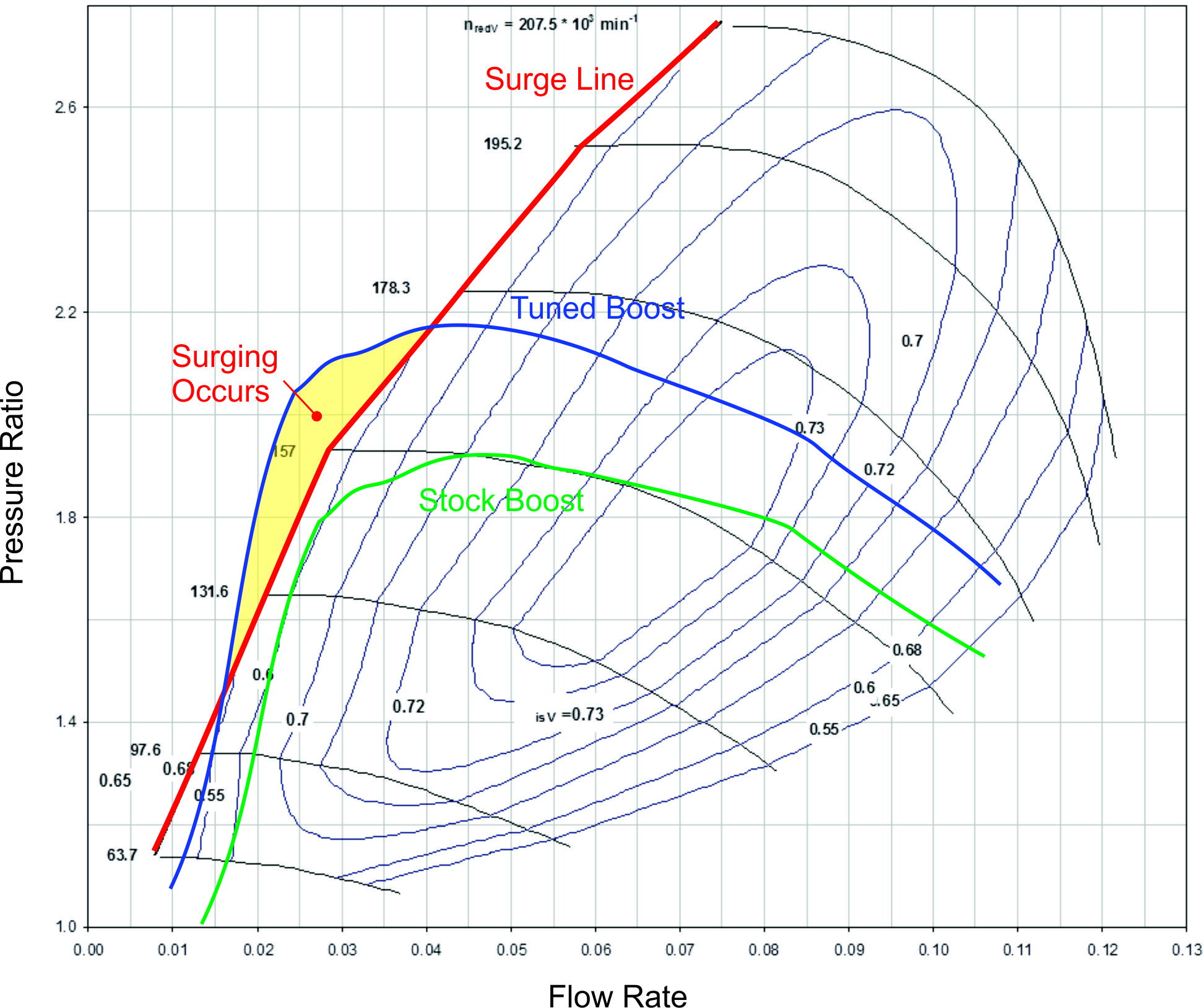 Generally speaking, a completely stock turbo engine will not compressor surge during acceleration. The issue is that most modern turbo engines have a very high tuning potential, and once tuned, can produce enough boost at low RPM to cause surge – the most common examples we see are:

How is this different to closed throttle compressor surge?

Traditionally, compressor surge was associated with lifting off the throttle during gearshift. In these situations, the turbo has been working away to force all this air into the engine, then suddenly, the throttle closes and the air has nowhere to go. At this point the pressure between the turbo and the throttle spikes, and the flow rate of air through the turbo drops, resulting in conditions likely situation for surge to occur. High boost and low flow.

In the scenario of closed throttle compressor surge the throttle plate is acting as a restriction. When we’re talking about open throttle compressor surge it is the engine itself that is the restriction. When this happens, the turbo is trying to force air into the cylinders faster than the engine can use it. The turbocharger is again working in an environment with a high pressure ratio and a low rate of airflow.

Shouldn’t a diverter or blow-off valve stop this?

The main purpose of a diverter valve or blow off valve is to stop compressor surge by reducing pressure and providing a bypass path to allow airflow to continue through the compressor, so why would it not solve open throttle surge?

A bypass or blow off valve should only come into play when the throttle is closed or closing, as this action by the throttle will induce surge since the airflow through the engine suddenly reduces. However, during acceleration the bypass or blow-off valve should be completely closed, otherwise it is creating a boost leak. Sure, opening the diverter valve during acceleration can prevent open-throttle surge, but the point is that it shouldn’t. There’s no point forcing the turbo to make boost and then vent it through a valve! It wastes energy and runs the turbo harder than necessary.

Why don’t I get this issue with my factory valve?

If you have a tuned turbo engine and have found that you get open throttle surge with an aftermarket blow-off or diverter valve (such as the GFB DV+), but it doesn’t occur with the factory diverter, that is an indication that the factory diverter is likely to be leaking.

To explain further, if the diverter valve were to leak a small amount of boost, it may be enough of a boost drop (or airflow increase) at low RPM to allow the compressor to move out of the surge region. In this case, fixing that leak by replacing the diverter valve will put the compressor back into surge. However, as discussed in the section above, creating boost then bleeding it off is not a logical method of “solving” open throttle compressor surge.

There are two main types of electronic OEM diverter valves. The diaphragm type, and the piston type. The diaphragm type has a well-known tendency to rupture over time, particularly on cars with higher than standard boost, so it is common to replace these with the piston type such as the REV D or REV C. These versions improved reliability, but it came at the cost of boost holding – the plastic piston is not well sealed 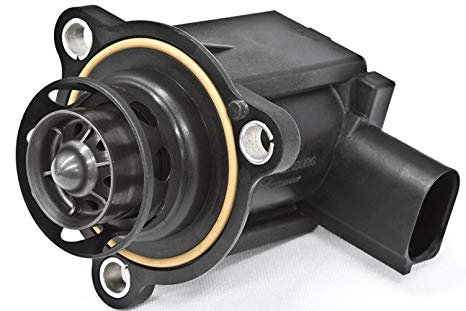 Because there is no external diverter valve plumbing in most of the cars that use diverter valves like this, any leak through this system will only go back to the intake and won’t be visible from outside. This means a conventional smoke test won’t show any signs of a boost leak, regardless of how poorly the diverter valve is sealing.

The DV+ features a silicon bonded piston which allows it to seal against the seat and hold whatever boost pressure the turbo can make. That’s great for performance, and is how a diverter should be. However, if a leaking factory diverter was masking a surge problem created by a tune that’s too aggressive, fitting a DV+ may highlight that issue. Hence why diverter valves are often incorrectly diagnosed as the cause of open-throttle compressor surge.

So what should I do if I have open throttle surge?

Based on what we learned from the compressor map, if you have open-throttle surge under particular driving conditions, your only options are to reduce boost or increase airflow under these conditions, or drive around the problem!

Since this problem almost exclusively occurs on cars that have been tuned and/or fitted with a larger turbo, the only CORRECT solutions are to reduce the pressure by modifying the tune in the engine load region where surge occurs, or increase airflow by eliminating restrictions in the turbo intake and exhaust, and in some cases by cleaning out the build-up of carbon on the intake valves that is common on older direct injection engines.