Thinking Outside the Box – How a Swedish Hypercar may have saved the internal combustion engine.

Compare the 0-100km/h times of the quickest supercars on the road today and you’ll see that a growing number on that list are hybrid or full electric. Whether you consider that a good or bad thing, there’s no denying the power and torque figures of electric motors are staggering, to the point where manufacturers can justify rating the power in MEGAwatts instead of kilowatts to save printing all the zeros.

The issue with electric power has always been the batteries and charging, and whilst companies like Tesla are working to address those issues, it’s still going to be a while before full electric becomes mainstream. This is where hybrids offer an excellent interim solution that leverages the astonishing torque of electric motors, whilst being able to use a smaller and lighter battery pack than a full EV thanks to the internal combustion engine that alleviates range anxiety.

One such example of a hybrid worth closer inspection is the Koenigsegg Gemera. Designed as a totally bonkers GT car with seating for 4 and room for luggage, it’s not your typical hybrid. The role of the internal combustion engine has been demoted to a “supplement”, and the balance of power given to the three electric motors. 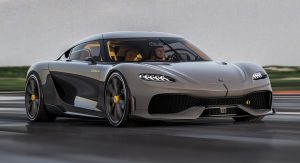 Each rear wheel is powered by its own 500hp electric motor, whilst the third 400hp electric motor is coupled to the 600hp engine to power the front wheels. With the magic of torque multiplication via the torque converter, there’s some 3500Nm available to turn the tyres which goes some way to explaining the claimed sub 2-second 0-100km/h time.

But let’s just back up for a minute. The internal combustion engine outputs 600hp, which sounds a little on the low side for a hypercar, but not when you consider it’s coming from 3 cylinder, 2 litre engine weighing only 70kg!

So overwhelming are the performance figures, power numbers, and technical wizardry on this car that 300hp per litre from a street-legal and emissions compliant engine is easily overlooked. Consider that the current highest specific power output of a production engine is the Mercedes CLA / GLA 45 at 187.5hp per litre, and you’ll see why this is a big deal. 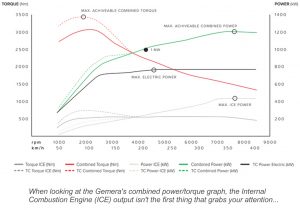 It’s not uncommon in the tuning world for modified engines to match or exceed 300hp per litre. But try passing an emissions test or asking for a factory warranty on that engine and see how far you get. There’s also the matter of “area under the curve”, and not a lot of modified engines making this kind of specific power are going to be particularly friendly to drive.

Koenigsegg calls their engine the Tiny Friendly Giant (TFG) – unusual but apt. At its heart is the “Freevalve” technology that controls the opening and closing of each valve electronically with pneumatic actuators, rather than using a camshaft. When you start exploring the new possibilities this system allows, it’s hard to imagine how we’ve made it this far with camshafts.

Every aspect of the combustion process can be manipulated by the valves, allowing multiple strategies to be used to blend power and economy without complex mechanical systems or compromises. Cylinder deactivation, elimination of the throttle (and associated pumping losses), and cold start emissions improvements are just some of the benefits. 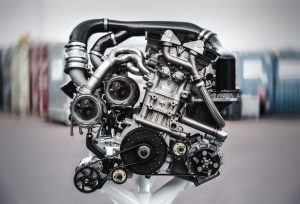 You don’t get to 300hp per litre without some form of forced induction, and this is yet another area that Koenigsegg have done something unique. The TFG uses a twin sequential turbo system unlike anything you’ve seen before. Each cylinder has two exhausts valves, one of which feeds the primary turbo, the other feeds the secondary.

At low RPM, the freevalve system opens only the exhaust valves connected to the primary turbo, ensuring it receives all of the engine’s exhaust gas for excellent boost response. As RPM increases, the secondary turbo is brought online by opening the remaining exhaust valves. This is how the TFG can deliver 600Nm of torque from 2000 to 7000RPM!

There’s far more to this car than can be discussed here, but the TFG engine is an exciting technology showcase that tells us the internal combustion engine has life in it yet, and that mind-altering performance and low emissions don’t necessarily have to exist at opposite ends of a spectrum.